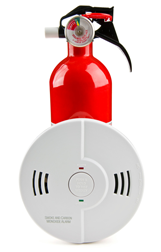 Fire Prevention Week was established to commemorate the Great Chicago Fire of 1871 that killed more than 250 people, left 100,000 homeless, destroyed more than 17,400 structures and burned more than 2,000 acres. The fire began on October 8, 1871. Those who survived the fire never forgot what they'd been through; the blaze produced countless tales of bravery and heroism.  The fire also changed the way firefighters and public officials thought about fire safety. On the 40th anniversary of the Great Chicago Fire, the Fire Marshals Association of North America (today known as the International Fire Marshals Association), decided that the anniversary of the Great Chicago Fire should be observed not with festivities, but in a way that would keep the public informed about the importance of fire prevention. In 1920, President Woodrow Wilson issued the first National Fire Prevention Day proclamation, and since 1922, Fire Prevention Week has been observed.  According to the National Archives and Records Administration's Library Information Center, Fire Prevention Week is the longest running public health and safety observance on record. The President of the United States has signed a proclamation declaring a national observance every year since 1925.  Each year has its own fire prevention theme. This year the following is a portion from President Trump’s proclamation:

“Each year, an average of 1.4 million fires burn in the United States, resulting in thousands of deaths and injuries along with billions of dollars in direct property damage.  This year, in the Western and Midwestern parts of the country, wildfires of unprecedented scale and scope have threatened local wildlife and the environment and have severely impacted local and regional economies through their devastating effect on agriculture and tourism industries.  In many areas, I have declared the wildfires a major disaster and ordered Federal assistance to supplement state and local recovery efforts.  My administration remains committed to providing help to those affected.

As we mark Fire Prevention Week, all Americans must be vigilant and take precautionary measures to reduce the risk of fire and to protect their families and property.  It is critical to look for places in the home where fires can start, identify potential hazards, and take the steps needed to prevent these devastating fires.  It is also important to regularly check and maintain smoke alarms, as these devices can provide life-saving warnings if there is a fire in the home.  If a smoke alarm rings, it is essential to respond quickly, as you may have only minutes to escape safely.  Furthermore, you should at least identify two ways to exit every room, ensuring all doors and windows leading to the outside open easily and are free of clutter.  The National Fire Protection Association’s 'Look. Listen. Learn.' campaign reinforces these basic but essential practices that every American must follow to help ensure fire safety.”

For more information on fire safety, check out the resources on our web site.